A new video highlighting more details of our beautiful apartments.

We have just opened up a brand new addition to our apartments. Located just outside the main building we have built a stand-alone one-bedroom cottage.

It will be perfect for a honeymoon or wedding couple, but all true romantics out there will truly love it! Offering more space than our standard one-bedroom units, it offers that extra sparkle of additional facilities and comfort. Benefiting from wonderful views over to the castle, it also offers a degree of privacy from all other residents. It will be wonderfully cosy all year round with the addition of a lovely wood-burning stove in the lounge, guaranteed to keep everyone toasty. Other features include a large four poster bed, and a huge bathroom giving you the option of a large walk-in shower or roll-top bath for those moments of indulgence.

As ever, all the internal furnishings are provided by ANTA Scotland, creating sumptuous contemporary interiors throughout. All in all, it’s a place you might never want to leave! 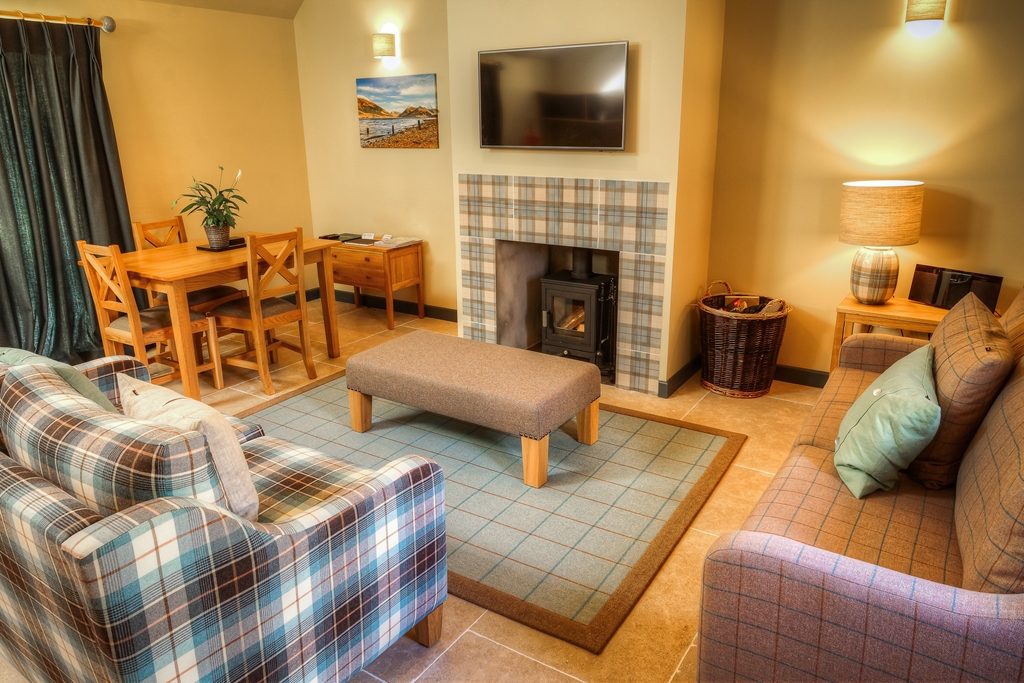 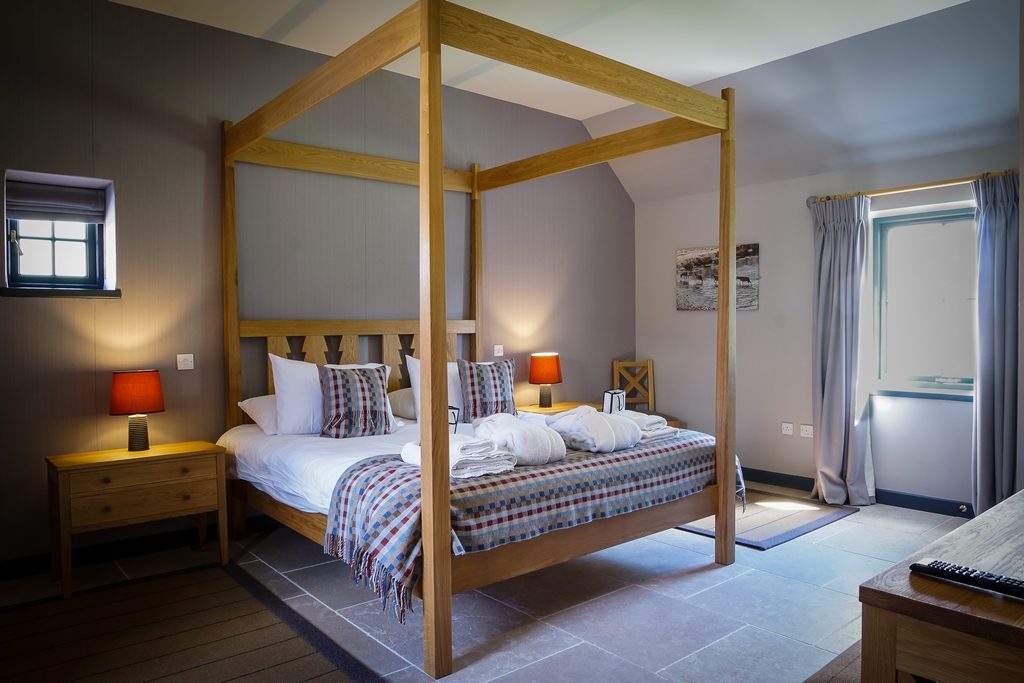 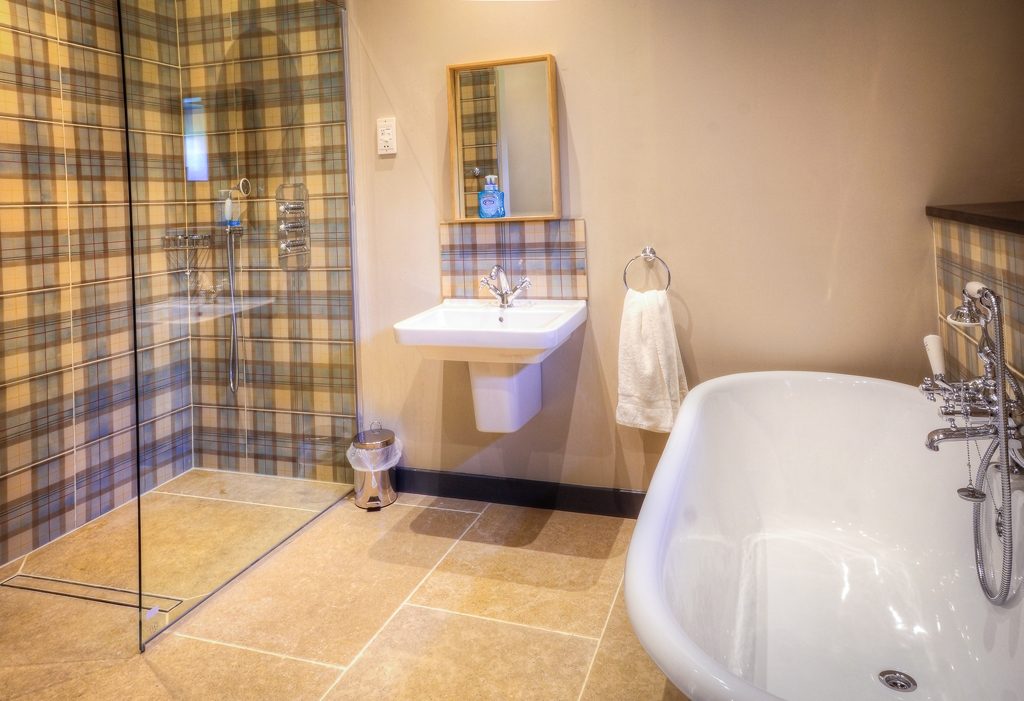 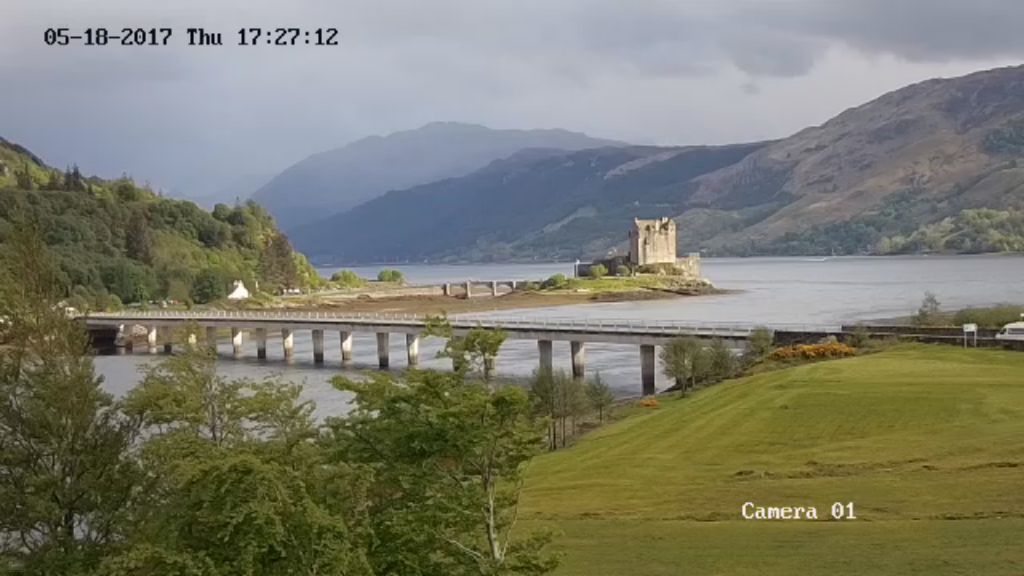 So after a great deal of effort we have finally managed to install our brand new live streaming webcam, which is now up and running and beaming video to all corners of the world. Over the last 5 years, our first webcam, located over at the Visitor Centre of the castle has proved hugely popular, with quite literally millions of people utilising it. On site, we share a direct web-link for this camera to our visitors, and many of them will phone friends and family just so they can log on and enjoy a wee wave or greeting from their loved ones on the other side of the camera.

Our 2nd camera, offering an entirely different perspective, has been mounted on the lee side of one of the building’s chimneys which helps to provide a little shelter from the worst of the highland wind and weather. The other benefit of this location is that it offers reasonably high elevation to view the castle across Loch Long, with Dornie Bridge in the foreground.

As is the way in the highlands, the light around the castle is always changing, and is hugely influenced by the season, the weather, the time of day or the turning of the tides, so you’re guaranteed a different view every time you log on for a look. Indeed if our first camera is anything to go by, many of you are likely to have a wee daily peek, just to see what’s going on!

Anyway, we hope you enjoy the new facility, and for those of you might be viewing from abroad, try to remember the time difference. You wouldn’t believe the number of people who contact us saying the camera’s not working without realising that night-time here can be pitch black!!!

The webcam can be accessed from the top of each page on this website, or you can click straight through HERE 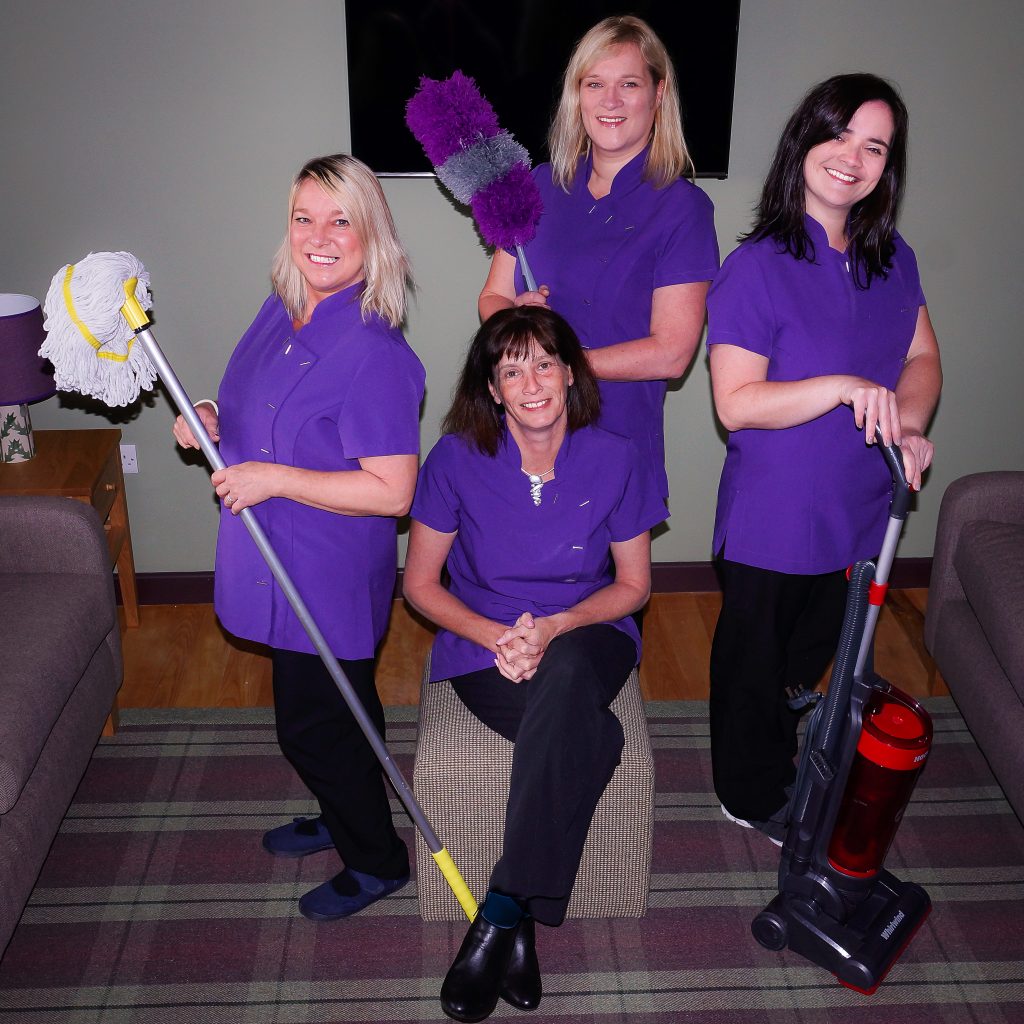 The foundation of any top-quality establishment is ALWAYS built on the people that operate it, and here at Eilean Donan Apartments we have four of the very best!

The team is led by Manager, April Williamson (seated) who is ably supported by (L to R) Yvonne, Jacqui and Mandy. All four are local girls with extensive experience in hospitality.

Starting any new venture like ours inevitably presents its fair share of challenges, yet the four girls rose to every one they faced and have approached the opening with boundless energy, enthusiasm and grace. Their first priority has always been anticipating the needs of our guests, and every new check-in is greeted with the kind of hospitality the highlands is famed for. Unless you’re arriving in the middle of the night, at least one of the girls will be on hand to welcome you, take you to your apartment personally, and explain the various nuances of each unit and the equipment it holds. You’re bound to have questions, and the girls will only be too happy to help with any queries you might have.

Suffice to say that the pride they take out of the place is only matched by the pride they put into it, so when you eventually meet them, make sure to stop for a wee blether; they don’t bite! They each have bags and bags of local knowledge and will very happily share that knowledge regarding local places of interest, sights to see, places to eat or the easiest place to pick up a spare toothbrush!

If there’s anything at all that you’re not happy with in your apartment, please, please, please raise it with at least one of them. We can only rectify any issues if we know about them, and the girls would much rather hear about them while you’re here than read about them on some TripAdvisor review after the event!

If you’re looking at this post, you might very well be considering choosing Eilean Donan as a venue for your wedding. You’ll have so many important decisions to take in the months ahead, and like most couples, probably only perfection will suffice for your every plan and detail. The problem is that it can sometimes be difficult to get a true feel for a setting or location prior to the big day itself. How do you create your vision? Well hopefully this post just might help.

We welcome Brides & Grooms to Eilean Donan from all round the world for their special day, with ceremonies normally taking place in our beautiful Banqueting Hall inside the castle itself. Every so often, when the happy couple desires, (and the weather Gods permit) we also hold ceremonies in the inner courtyard of the castle, overlooking the very lochs and mountains that draw our visitors here.

Emily & Michael, from Canada, were married here recently and have allowed the world to share in their incredible marriage thanks to this stunning video from Thistle Productions

Hopefully, this might give you a few ideas of your own.

Commonly referred to as Scotland’s most romantic castle; Eilean Donan offers a truly spectacular venue for your wedding. Located where three sea-lochs meet, surrounded by highland mountains and situated on a small island only accessible by its stone bridge, the castle has a unique magic all of its own, and is guaranteed to leave your guests talking for years to come.

With those guests in mind, we have just opened our brand new development of Eilean Donan Apartments, located just across the water from the castle itself. Offering 12 beautifully appointed, contemporary self-catering units of varying sizes it’s the perfect location to house your party under one roof. With six acres of land, there’s even room enough for a marquee on the lawn, although the area is well served with other wedding services too.

For the privacy of the bride and groom, we also offer our stunning holiday cottage which sits on the loch-side overlooking the castle, enjoying un-interrupted views which will simply leave you breathless.

So before you make any big decisions, just check out either of our two websites or social media channels to see the full Eilean Donan picture. You’ll most certainly have questions, so please don’t hesitate to call Rona, our Wedding Co-ordinator on 01599 555202 who’ll be very happy to help. 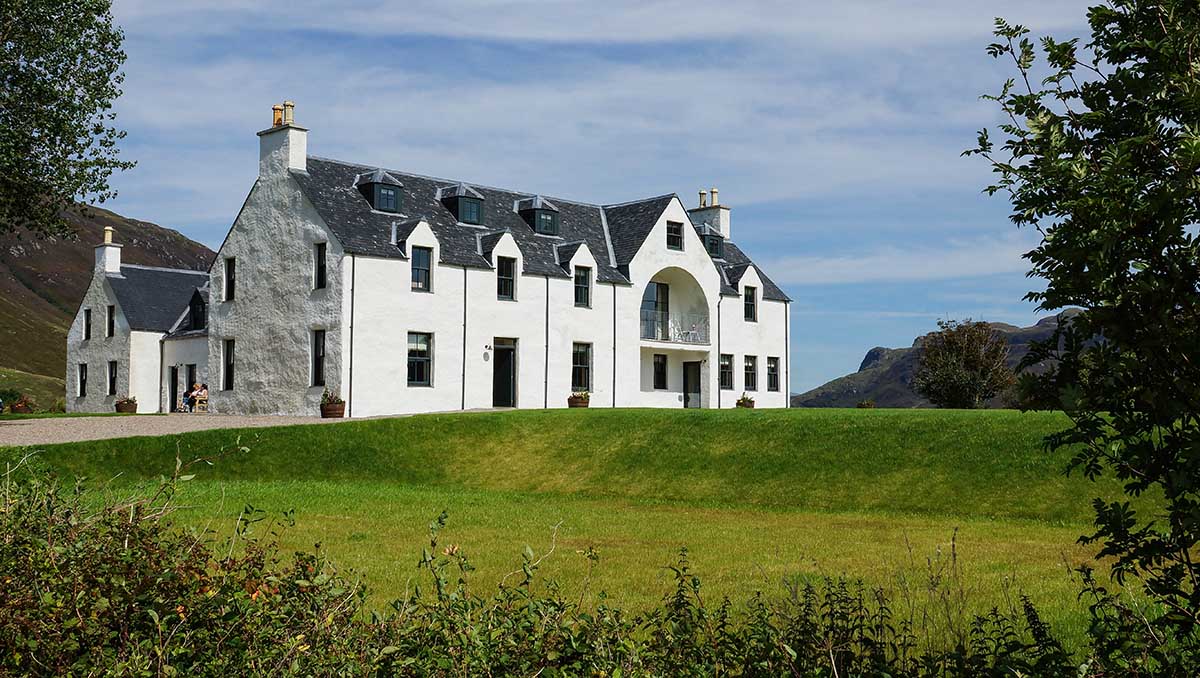 As we make the final preparations to open our new apartments to the outside world, it’s perhaps an opportune moment to reflect on the journey the old place has had to date.

The building itself has had a number of different identities in its time and has always played an important role in the local community. It was originally opened as The Aird Ferry Hotel towards the end of the 19th century, due mainly to its proximity to the original ferry which crossed Loch Long between Ardelve Point and Dornie. The word “ferry” is somewhat ambiguous actually, as it was fundamentally just a large rowing boat. On the rare occasion when a car needed to cross the water, it was simply mounted on a couple of stout planks across the gunwales and rowed across somewhat precariously! Eventually, this rowing boat was replaced with a motor boat with a turntable which could carry one car. Progress indeed!

After much discussion and a fair amount of local politicking, it was decided that the ferry was inadequate, and that perhaps a bridge should be constructed close to the hotel. On the 30th of April 1940 the first bridge over Loch Long was opened to the public, and with it, easier access to Lochalsh and the Isle of Skye. So began a somewhat golden era for the hotel, with Doctors, Lawyers, professionals and the like, making their way up to the highlands from Scotland’s central belt. Regular visitors would demand the same room as they’d always had, and preferably their same table in the rather formal dining-room.

The hotel kitchens were partially supplied by the local community, keen to sell any surplus produce from their crofts and farms. Fruit and vegetables were also grown in the hotel’s loch-side garden, and local fishermen would often turn up at the back door with their “catch of the day.” Churns of milk, along with butter and cheese were delivered from the nearby Conchra Estate, with all this supplemented by weekly deliveries from a variety of different grocery vans, weather permitting!

Reflecting on the 1960s and 70s, it appears that the hotel retained its upmarket position, and was certainly very much in demand. Locals in the know remember vast quantities of crisp white linen on the washing-lines, and staff were attired in the formal black & white service garb of the day.

Members of our staff (who were children at the time) recall the irresistible smells of roasting meats wafting on the highland air as the hotel’s kitchens prepared for the busy Sunday lunch service; but strangers from afar were not the only people to benefit from the hotel, as it also played a hugely important social role within the local community. Not only was it a valuable employer in an area with fairly limited work opportunities, but it was also a key venue for many social gatherings. Barn dances were held in the adjacent out-buildings, village gala days took place on the large tract of land at the front of the building, and local weddings were celebrated under its roof. As the 1980s arrived, it became something of a musical Mecca, with the community gathering with a dram or three to enjoy many a fine musician in front of a roaring fire.

As the nineties and noughties arrived, the hotel slipped into a more sedate period, especially as the licensed trade started to suffer, and drink-driving laws become more to the fore. Visitors still came to the hotel, primarily because of the wonderful location, but the building itself was certainly starting to show her age, and more than a few signs of fatigue.

So for the last two years we’ve been investing heavily in refurbishing and re-designing the entire building in preparation for a major relaunch, albeit with a slightly different role than its original one. The hotel environment may be gone, but the future looks brighter now than it has for many a year and we look forward to welcoming the next generations of residents to the charms of the old place.